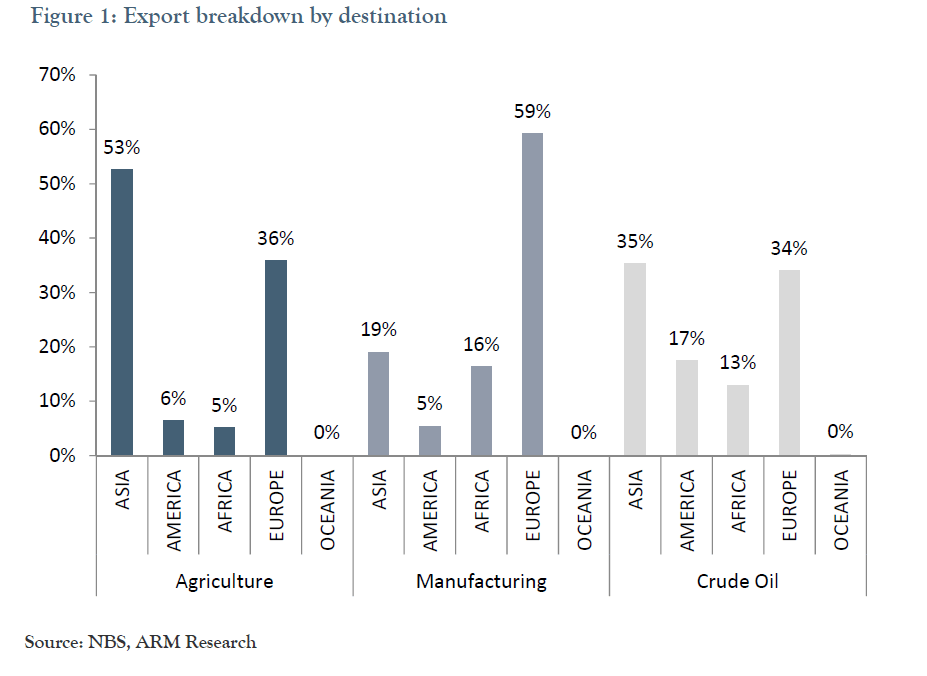 Nigeria’s trade balance extended its surplus position into a second consecutive quarter in Q1 17 (N719 billion), following another sturdy rise in exports (+109% YoY to N3.0 trillion) relative to a 35% increase in value of imports.1 According to NBS, it took sharp increases (average of 142% YoY) across “Petroleum oils and oils obtained from bituminous minerals, crude” and “Natural gas, liquefied” to keep exports on its strongest growth trajectory in over thirteen quarters. Specifically, reflecting an OPEC induced rejig in global oil prices (+53% YoY to $51.18 per barrel) and naira devaluation of 55% YoY to N305, crude oil exports more than doubled YoY but saw its overall attribution largely unchanged at 78% of headline export in Q1 17 (vs. 77% in Q1 16) due to similar jumps in other export components.

The broad-based rise in exports also reflected sustained scamper for attractive greenback in the review period. Notably, the sharp increase in prices and pass-through from naira down-leg was enough to mask fallouts from a 14% contraction in domestic crude production in the review period.

In terms of Nigeria’s trade relations, available data suggests that India was Nigeria’s most important export partner in Q1 17, with the Asian tiger single handedly accounting for 22.2% of Nigeria’s overall exports. Precisely, India reportedly consumed 30% of Nigeria’s crude exports over the first three months of 2017 while also standing out as the fifth largest consumer of Nigeria’s Agricultural exports in the review period.

Elsewhere, United States and Spain accounted for another 13.9% and 10.8% of overall exports, with consumption from both countries accounting for 22% of Nigeria’s non-crude exports (vs. 15% in the corresponding period of 2016) and making up for their slightly narrowing relevance in the consumption of Nigeria’s crude. To the latter point, we note that joint consumption attribution for the countries shrank 2pps YoY to 25% in Q1 17. Within the African region, Nigeria also sustained its export push with South Africa leading the way with a 91% YoY rise in its demand for Nigerian crude.