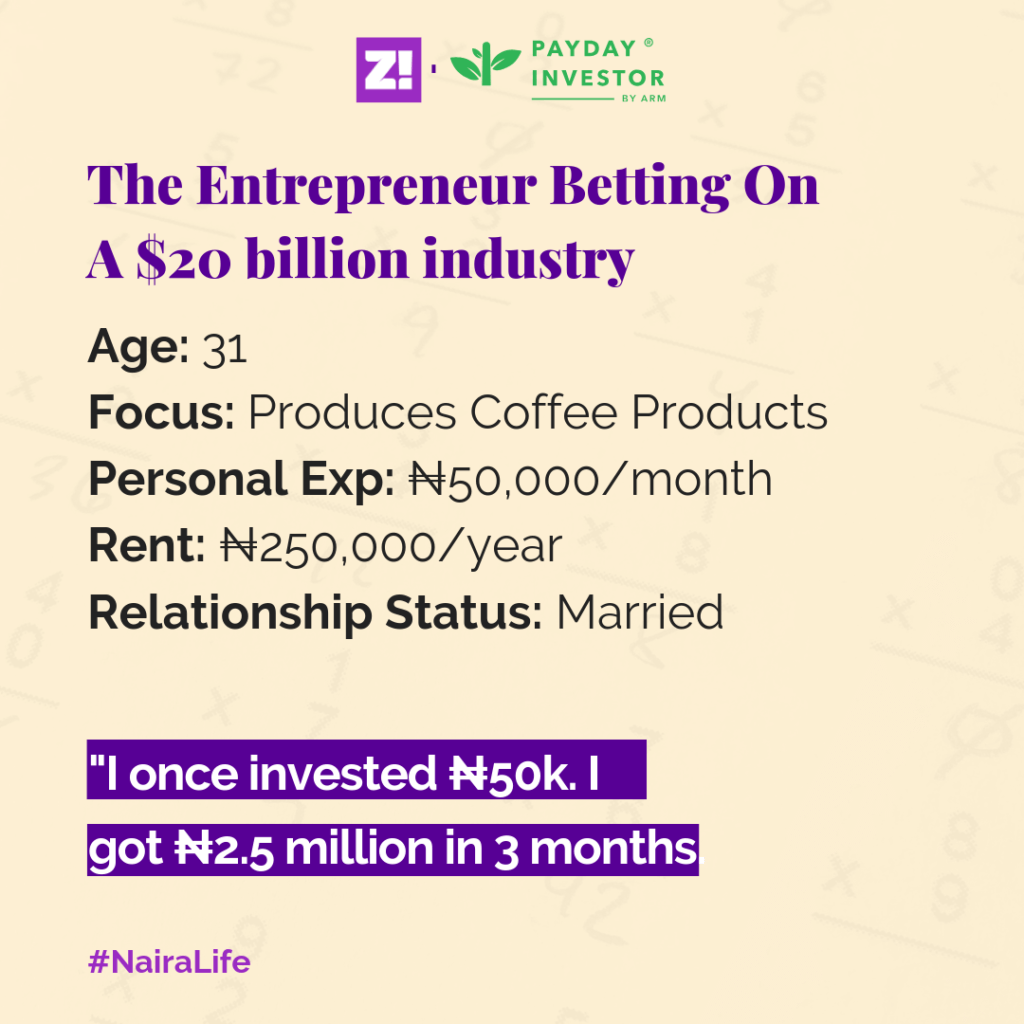 Every week, Zikoko seeks to understand how people move the Naira in and out of their lives. Some stories will be struggle-ish, others will be bougie. All the time, it’ll be revealing.

This week’s story pulled off in collaboration with Payday Investor. Before you start to make plans about your next salary, click here.

When was the first time you made any money?

That’s an interesting question because I didn’t make money until I was in my final year at school. I had this friend that cared very little about money, and life, so he drank a lot. But he was a really great artist.

On the other end of things, my dad gave me ₦50k to pay my school fees. And what did I do, I carried that money and used it to buy materials for my friend.

I gave my guy one million. Paid my school fees. Then I spent about ₦800k on getting people to make noise about it – PR in some of the right places. That fetched us other gigs that brought in about ₦1.9 million.

Some people at the Government house took an interest in me. The best thing about working with people in government is the access it gives you. Meanwhile, I started looking for what to do with all that money, so I invested some of it in stocks and acquired some land. Pushed that into Agric.

Sounds robust. What happened next?

I applied for YouWin in 2014 and got a grant of ₦6.5 million. It was actually a partner and me.

My partner was the admin and comms guy while I was away, and I was the technical guy.

How did the Fonio business go?

First of all, Fonio, or what we call Acha locally, is a kind of grain. It used to be really popular, but it didn’t get all the love that Sorghum, millet and co have gotten. What we wanted to do was experiment with Fonio in more consumer-friendly forms. We tried it in baking and different recipes. So we developed a packaged product.

We got the money in tranches, and the first one was about ₦1.9 million. The first thing we bought was some equipment. There was a kind of dryer we wanted to buy, but it would have cost us about ₦1.5 million locally to bring it here. So I carried my mechanical engineering sense, and we fabricated locally. That cost ₦500k.

We didn’t want to wait for all the money, so we got started immediately. Took the rest of the money buying tons of Fonio from local women, dehull, wash and package.

The value we were trying to add was taking it quicker to consumption.

What’s the demand for Fonio?

It’s a resilient crop, and it requires no fertiliser. People use it for various things, like pudding, swallow, and even baking. People also tend to encourage it as a healthy alternative for diabetic people. But, Fonio doesn’t get as much love as you’d expect. It’s not so popular in Nigeria, so while we believed we had a great product, there was one problem – advocacy.

I started to experiment with other stuff and gently ease out of full management of Fonio. Somehow, I found my way back to an old obsession – Coffee.

I live in Jos, and because our climate is unique, coffee grows here. I had a coffee tree from about 15 years ago. I’d roast the beans for my dad, and he’d give feedback and I’d improve it.

Then I started going to people who had farms and buying berries from them. Buy, process, roast, sell. And slowly, it grew. By  October, we’d done about 800k in revenue. The profit was just about 380-something-k.

The biggest struggle that year though, was that when I started buying coffee, a lot of them were bad. So I started researching more about how to properly treat coffee better, and transferring whatever I learned to farmers.

₦380k? I’m not sure that was enough to sustain you.

So, because I was researching more than most people, that also created another opportunity. I started consulting for other farmers, and someone even asked me to help him co-manage his plantation. It’s sitting on about 50 hectares of land.

I believe there’s a growing coffee culture in Nigeria, and I want to be a part of that. Especially because the coffee we brew is not only fresh – a lot of imported coffee is stale – and it’s homegrown.

If you ask me about numbers, I can assure you that I know very little about those things. My wife was the one managing my finances, while I just focused on making my roast better.

Hello, your partner asked me to ask you about money, because he doesn’t seem to know much about it.

Hahaha. Very good. I actually started keeping records in July 2017, because there needed to be a system that showed progression and tracked growth or something. There was no evidence that there was growth, because we weren’t tracking anything. He’s passionate, but passion is not always enough to run a business. If you have passion but no skills, it dies.

In August 2017, it was ₦50k. These days, it can fetch many times that amount on very good months. In March, for example, we made up to ₦400k in profit.

Yes, that’s more than the entire 2017 from selling coffee alone. We tend to re-invest a lot of it in materials, from the coffee beans to the packaging. Also, because you don’t harvest all year round, we invest in buying a large amount of coffee beans.

So, what’s the most important lesson as an entrepreneur?

First of all, hunger is super important. I think entrepreneurship forces you to improve, make things better, and do things differently.

It is also forcing me to work on my personal discipline; in finance, in relationships, and everything –

Her: – he still needs to hire someone to manage his books. I can no longer do it because my 9-5 job is taking my time. There needs to be someone to actually pay him a salary. That forces him to be more accountable.

How much salary do you think you’d earn as an entrepreneur in 5 years?

Him: Okay, ₦250k. I think what is most important for me is that we have a strong place in the new coffee culture in Nigeria in the next 5 years.

Entrepreneur or not, bills need to get paid. How’s that going?

First of all, the most important one is rent, and ₦250k per year fetches us a really good 2-bedroom. I hardly go out much, except I have to go and get materials. That means I don’t spend a lot on transport. Last-last, ₦50k is enough for a good month in Jos.

Minus your business, what other investments do you have?

Her: Right now, we’re actually looking into doing mutual funds, my sister is a heavy investor in mutual funds. I’m considering it too though. Aside from that, I also invested in a farm with my parents. It’s about 9 hectares of Rice and Soya Beans.

When do you think you’ll retire?

Her: My husband said he wants to die at 85, so that he doesn’t turn to anybody’s problem. Hahaha.

Her: Too small. Anyway, you’ll be too troublesome then.
Him: By 60, I’m done with work. Then I’ll be travelling, and having the time of my life.

What was the last thing you paid for that required serious planning?

A van – to be honest, it’s still in the works. My farm is quite far from the house, so buying a van will help me move produce fast.

What’s the most annoying thing you’ve paid for recently?

We paid for coffee, and they gave us bad coffee beans. We had to return it, and they didn’t pay back for up to a year. A loss.

Do you have an emergency plan for weird things like health emergencies?

Her: We were actually talking about that yesterday, I think we’re going to do it with one of these apps.

Her: To be honest, we’ve not reached where we want to go.

Him: Yep. But I really don’t feel like I’m struggling, I even have room to give a lot. So, I’m really good.

Her: We need more sha.