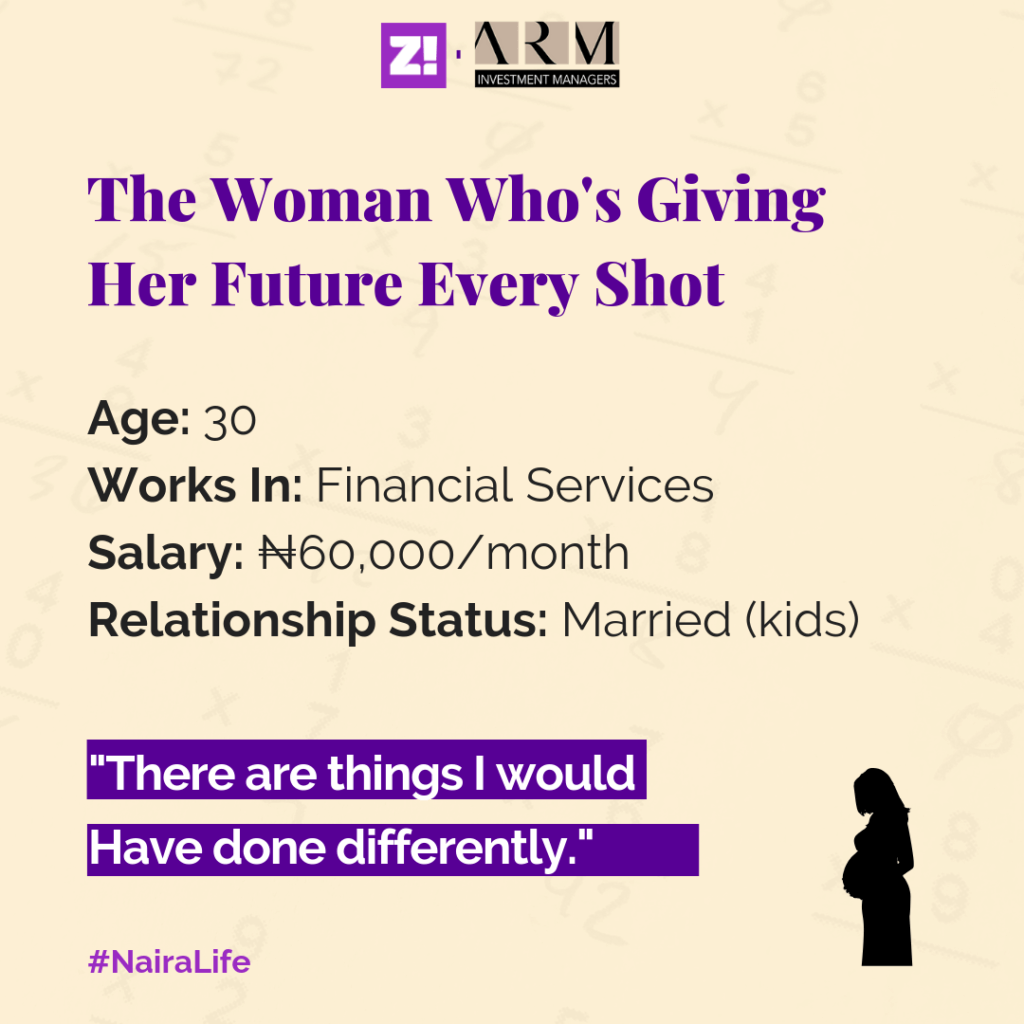 Still Fighting For Her Future at ₦60k/month

Every week, we ask anonymous people to give us a window into their relationship with the Naira – their secret Naira Life.

This week’s story pulled off in collaboration with ARM PENSIONS. Tomorrow is looking good. How’s it looking for you? Start making tomorrow look good by making the right calls today, by clicking here.

When was the first time you earned money?

A scholarship when I was in 100-level. The money wasn’t coming to me – it was going to my dad’s account – but it was in my name. That’s the first money that’s ever come in my name. 220k a year.

But besides that, I didn’t make any money in Uni or anything like that. No businesses and all that.

After NYSC, I travelled for Masters and so I was also working. This was 2012. My first job was paying £7/hour and I worked and I worked 8 hours a day – 40 hours per week. I was a cold-caller at a Utility company. Also, students were restricted to 40 hours a week. I changed jobs twice after, but by the time I was coming to Nigeria, I had about £3,000 in cash. I already invested £1,200 of the money in Nigerian stocks, mostly oil company stocks.

Why did you come back?

Marriage noni. I actually proposed not coming back, but my fiancee didn’t want to relocate. My family was like “Oh come back, don’t worry you’ll get this and that.” So I came back.

Marriage plans kicked off immediately. I think only the bridesmaids’ dresses and my wedding gowns. But I really didn’t have to spend much. My family paid for the whole thing.

After marriage, I was just chilling and getting into the job hunt vibe, then one morning, two things happened.

I got an email from an auditing firm – one of the biggest in the world – emailed But then, something else popped.

Bẹlẹ́. I found out I was pregnant. I really wanted to continue with the application, but when these guys interview you, there’s always the screening exercise where you run all kinds of tests. The tests were definitely going to come back with a positive for pregnancy. So I just let it go.

Also, there was some comfort in the fact that I hadn’t exactly run out of my small stash of money, so I focused on carrying my baby full term. The baby came in 2015. When my baby came, I wanted to give the baby some time before going back to job hunting.

I committed the next year and a half, and so I started job hunting in mid-2016 again. Then the recession hit.

What was your biggest struggle at this point?

First, I was doing the usual blind applications online, sending in CVs and all. My partner hustled for jobs and opportunities too. The ones that invited me for interview were like, “you’re married. How are you going to manage both? Will your husband be comfortable with late nights?”

Tragic. How were you getting money to get by all this time?

I was throwing the little money I had into a bunch of things. I invested in a family member’s poultry farm that brought in some stipends. For every ₦200k I invested, I got a profit of ₦80k in 4 months. Then allowances from my partner.

I tried experimenting in stuff. For example. I started helping small businesses with their bookkeeping and projections. Only 3 gigs came that year, 2016, and they were at ₦30k each. I tried starting a business to keep busy, but the margins weren’t good enough to earn anything from it. It really was just to keep me busy.

2017 was a drought for me. There was this company – a small financial services company – they hired me on a contract basis. So I only got paid when there was work, but I really just wanted the experience. There was a lot of free time, and I was like, “might as well drop another baby since I’m at home.”

I kind of knew how many children I wanted to have, so might as well. I went on to have my second baby in 2018. Some months after my second baby, I got a fulltime job now paying ₦60k.

What’s happened to your perspective between 2014 and now?

Not like marriage is bad, but growth might be harder when you have to carry people along, somehow. If I wasn’t married I wouldn’t have had a child. If I didn’t have a child, I’ll most likely be earning more.

The job market, especially at entry level, has a prejudice against married women and mothers because they assume you’ll be making excuses for family and all that.

That period also showed me that I’m not a “buying and selling” person. I’d rather spend my time providing services. There’s also the part that I grew up really comfortable – there was always money. But you see this period? I learned frugality.

Let’s break down that monthly ₦60k.

First, because I’ve started working, I’m having to restock on work clothes. My partner provides for most of the big bill needs, but he still gives me money for the kids’ care. He pulls in all his weight, but to be honest, baby care money is never enough.

Then there are small debts from when I didn’t have a job. Transport is cheap because my workplace is not too far from where I live, so it’s almost negligible.

How much money do you feel like you should be earning right now?

Hahaha. ₦400k, at the very least. And that’s because of the experience I would have gained between then and now. Plus the qualifications I now have – ICAN.

Okay, realistically how much money is good money right now?

What’s something you want but can’t afford?

A good phone, a powerful computer, and a good watch.

Do you have a pension?

Hahaha. Pension ko, pension ni. The company I work at is really small. To be honest, they can’t even afford it.

What’s the last thing you paid for that require serious planning?

My ICAN induction. I had to plan for that ₦100k because it’s not like I had any money at the time. Also, I’m currently paying for graphic design classes – ₦70k.

Yeah. I love design, video games, animation and all of that. I’ve been enthusiastic about them for as long as I can remember. When I was Abroad, I spent a lot of my money on buying game CDs – GTA V, Far Cry, God of War, Assassins Creed, Driver, etc.

Anyway, paying for it took a big hit on my finances.

Sounds like an important investment. Tell me about your other investments.

I invested in stocks, and although it made some decent dividends, it took a hit in 2016 during the recession. At some point, I had to liquidate the stocks for an emergency.

Also, there’s that farm that the family member has. But Oga farmer is no longer receiving outside investment. So I have no active monetary investments.

What’s the most annoying miscellaneous you paid for recently?

A bridal shower. Ugh. It was ₦10k, but that money was unexpected at the time.

Do you have an emergency plan for health and all that stuff?

My father. My father is my 9-1-1. I mean, my partner always comes through, but I can also be sure of my father.

What’s the scale of your happiness looking like right now?

7/10, and it’s mostly because of my kids. They’re the reason I still keep fighting and pushing to be better. They are the reason all those years don’t feel wasted.

What do you think you’d have done differently about the last few years?

I’ll use protection, first of all. I don’t regret my first child, but I’d have conceived that baby much later when I’m already working. In fact, this is the order I would have done it; get a job, then marry, then have kids.

This week’s story was made possible by ARM LIFE INSURANCE. Find out how to get started here!