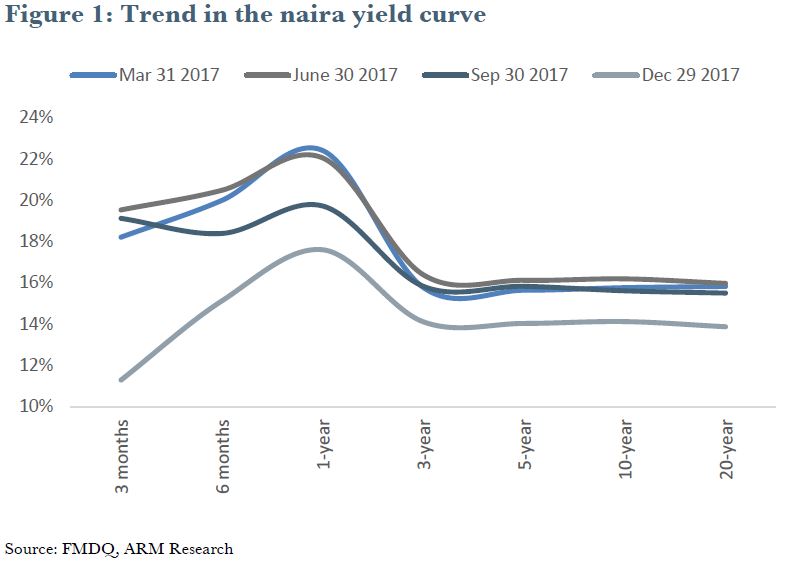 In the last 24 months, more than in any other period in recent memory, inflationary pressure provided a ready cover for monetary tightening in defence of the key policy anchor, the naira. In our inflation outlook, we highlighted that the absence of supply shocks and base effects, guides to benign inflationary pressure in 2018, as removing the positive real yields justification of contractionary monetary policy.

Furthermore, following expected boost in reserve inflows, we expect the monetary policy to loosen its grip, over 2018, with an expected cut in MPR to 12% in H2 2018. In addition to the foregoing, monetary policy looks set to grapple with an elevated liquidity profile for NTBs, OMOs and bonds over 2018. This view would sit well with a fiscal side, now inclined to reduce its borrowing cost and should result in more forceful fiscal pressures on the apex bank to adopt an accommodative stance given its renewed attempts at economic stimulation.

More so, given FG’s appetite for external borrowings to fund the budget and refinance maturing treasury bills, the combination of lower bond issuance and net NTB maturity, is expected to drive a gravitational force in rates.

In our Q4 2017 NSR update, we identified the confluence of a less hawkish monetary policy, lower domestic borrowings, and perhaps some form of coordination between fiscal and monetary policy to ease financing costs, as key drivers for a downtrend in yields. In sync with our views, after expanding over H1 2017 (+142bps to 18.28%), the naira yield curve declined by 636bps to 17.1% over H2 2017.

The moderation in the yield curve rode on the wings of policy shifts by the fiscal and monetary authorities. On the monetary leg, after a hostile strain on system liquidity via OMO issuance (net OMO issuance in H1 17: N893 billion), the CBN allowed liquidity build up into massive demand at the primary market which eventually resulted in rates decline at the primary market auction (PMA). For context, contrary to net OMO issuance in the first half, it was a case of net OMO maturity of N636 billion between July and November 2017.

However, on the back of increased liquidity from maturing treasury bills in December, the CBN issued N1.3 trillion in December to drive overall net OMO issuance for the review period. In addition, the CBN ceased issuance of the one-year bills at its OMO auctions, which led to a downtrend in Treasury bill yields with longer term rates dropping faster than that of shorter-term instruments. Consequently, average yield at the short end of the curve decline by 508bps to 13.4% in the period.