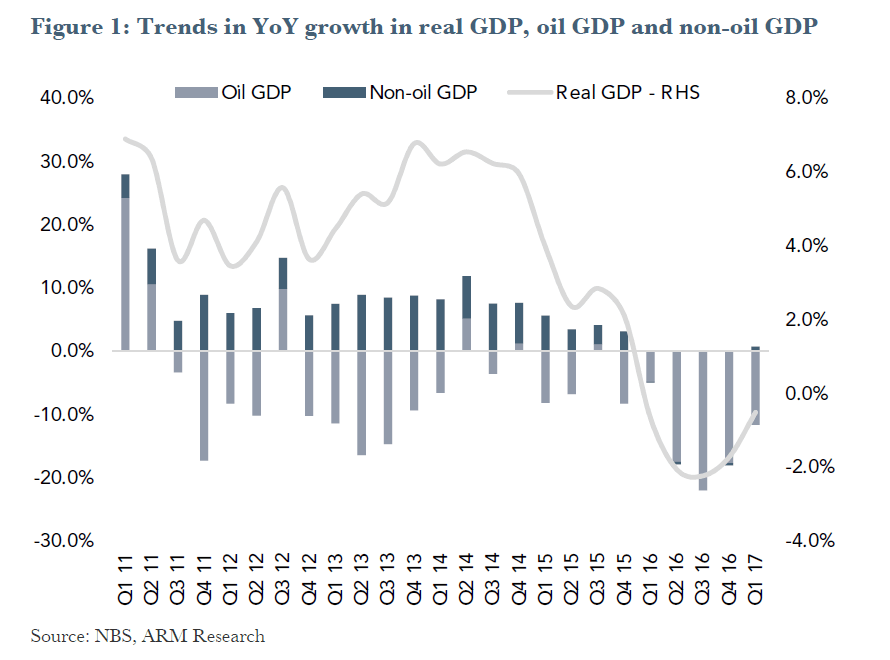 Extending the trend from 2016, when output shrank 1.5% relative to 2015—encapsulating four quarters of YoY contraction, real GDP contracted 0.5% YoY in the first quarter of 2017. However, this reading

was not only an improvement from the -1.3% YoY contraction registered during the preceding quarter but was also the smallest contraction since the trend began. The improvement appears to buttress our view, premised on PMI-strengthening, and as expressed in our H1 17 strategy report, that Nigeria might be coming out of recession in Q2 17.

The second consecutive quarter of narrower contraction in oil GDP achieved in Q1 17 reflects 3.9% QoQ recovery in oil production to 1.83mbpd (Q1 16: 2.02mbpd). The production boost was largely owed to the lifting of force majeure on Brass terminal (120kbpd) in February 2017 as well as lower pipeline vandalism (-67% on average from 2016 to 2017). On the latter, we think FG’s conciliatory efforts have calmed the activities of Niger-Delta militants, who are set to receive higher amnesty payments in 2017 (over twofold YoY to N77 billion) going by the recently passed budget. Regardless, the lower production relative to corresponding quarter in 2016 continues to hinge on the force majeure on Forcados pipeline (330kbpd) which lingered over the review period alongside temporary shut-in of the Nembe Creek Trunk Line causing a shut-in planned production of 232kbpd in March 2017.

Recovery in ICT shoves Services GDP out of recession.

Starting off with the largest component of non-oil GDP, Services recorded positive growth (1% YoY) after three consecutive quarters of contraction, on the back of 2.7% YoY acceleration in ICT sub-sector (33% of Services). The improvement in ICT largely reflected activities in the Telecommunications sub-sector where the 3.12% YoY growth in Mobile GSM subscribers to 152 million people and incorporation of 98 thousand subscribers from Voice over Internet Protocol technology (VoIP) from NTEL and Smile supported a 2.9% YoY growth. Strong growth was also recorded in smaller sub-divisions such as Transport (+10.5% YoY) and Arts, Entertainment & Recreation (+11.7% YoY) which more than offset sustained contraction in Real estate (-3.1% YoY).

Though the latter contracted for a fifth consecutive quarter, it maintained the theme of improvement by shrinking at a slower pace and with ancillary sectors—building & construction and cement—improving after successive quarters of downtrend, outlook appears brighter. Nonetheless, sluggishness lingered across all its sub-segments in the current period – urban office rentals remained under pressure as shrinking corporate profitability reduced take-up.