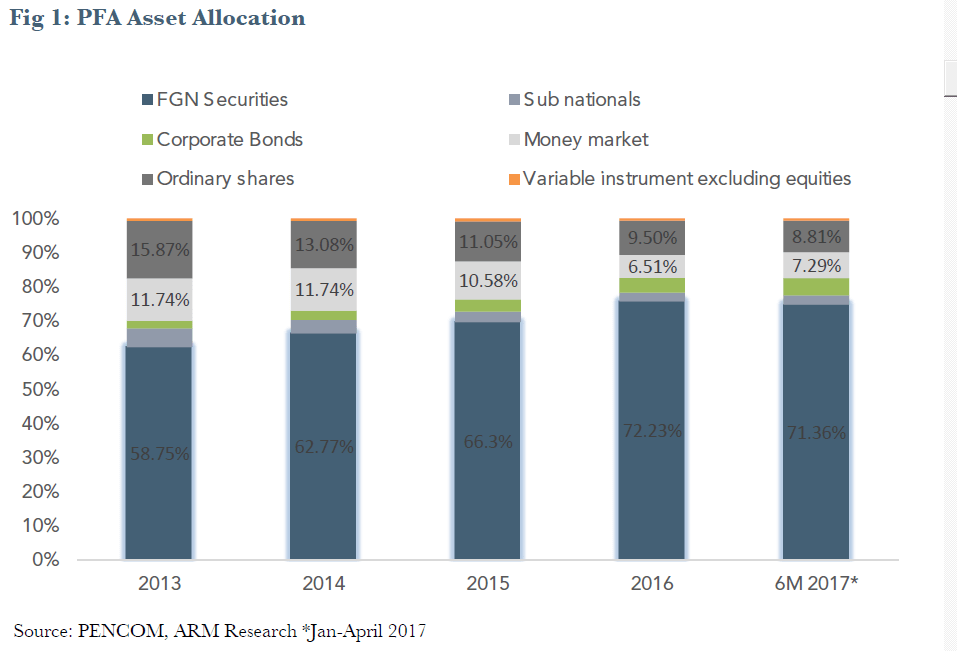 Pension fund assets continued its steady growth with AUM rising 5.4% to N6.4 trillion between year-end 2016 to April 2017. As in prior years, the increase in AUM was driven by increased return on pension funds as fixed income instruments gained +5.43pps, reflecting the prevailing general risk averseness exhibited by PFAs but also tactical shift in asset allocation to take advantage of the elevated yields at the short-end of the yield curve.

Accordingly, T-bills holdings, rose 3.01pps to 15.66%, the quickest rate in 7 months while allocation to bonds fell for the fourth time over the review period. One surprise is the 24% (~N60 billion) increase in CPFA’s allocation to corporate bonds. Given that there were no sizeable corporate bond issues over the period, we suspect the development is likely a reclassification of some sort. Extending the decline of the last three years, variable income holdings fell marginally 0.81pps to 12.8% reflecting the dominance of equities within this asset group.

Specifically, while equities holdings which is 69% of variable income fell (-4%) alongside private equity (-8.36%) and real estate properties (-6.41%), allocation to infrastructure funds doubled to 106.75%. The jump in PFA exposure to infrastructure asset class suggests government’s thrust in channeling pension assets towards infrastructure might be yielding the desire outcomes. Nevertheless, at 0.07% of AUM, PFA investment in infrastructure is yet to scratch the surface.

On the 18th of April 2017, the National Pension Commission (PENCOM) released amended Regulation on Investment of Pension Fund Assets. Central to the amendment is the introduction of the multi-fund structure which splits the RSA active and Retiree into potentially four funds with varying risk appetite as captured by varying asset allocation via minimum allocation to variable income instruments1. Other notable changes include allowing Pension assets to be invested in companies evolving from a merger, acquisition or combination arrangement and would-be listed companies via IPO or private placement approved by SEC.

Furthermore, the new guideline permits investment of the pension funds in non-interest compliant funds, particularly sukuk bonds issued by either state or corporate entities and the global depository notes. Consequently, the impact of the changes is already being felt in the capital market as the lifting of the investment ban on companies formed from reorganization, in part, led to strong gains of 120%, 13.6%And 90% in Stanbic, FCMB and FBNH over H1 17. Similarly, with Sukuk now investable by PFA, the FGN recently unveiled plans to raise N100 billion Sukuk bond.

Elsewhere, the proposed amendments reviewed the number of ratings required for most qualifying investment to two, and in support of local content, mandates that at least one of the rating should be from a local rating agency. Also, in encouraging more Africa focused infrastructure funds to come to Nigeria, only 60% of the projects have to be in Nigeria vs 75% under the previous regulation.