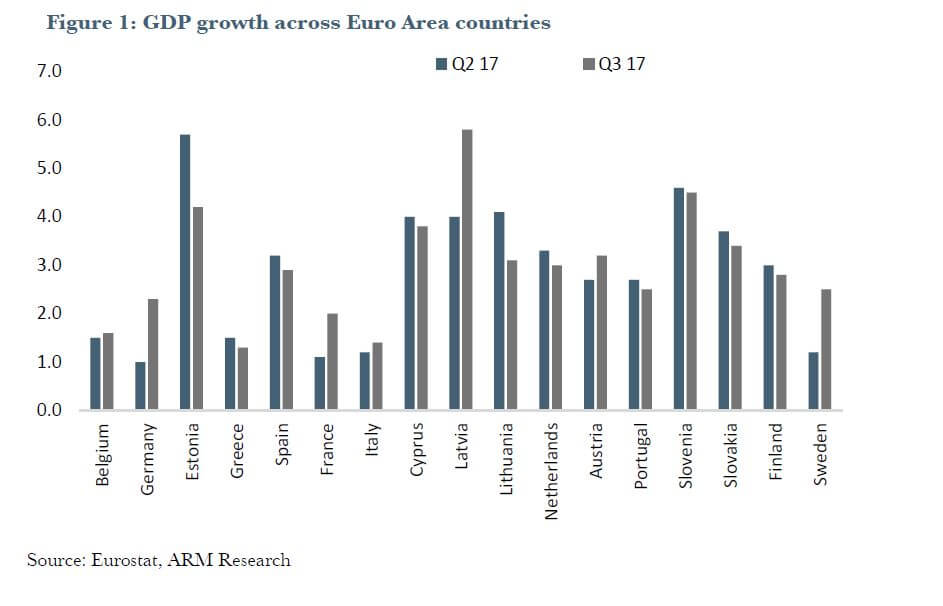 GLOBAL GROWTH: Riding on the swing of improved fundamentals

Entering 2017, investors worried that the downside risk from political elections across the Euro Area and anti-trade rhetoric in the face of a strong US dollar under a Trump presidency could dampen growth in the globe. However, the global economy was upbeat with economic momentum in developed nations (DMs) prompting a rumbling effect across the globe.

On the former, higher growth emanated from growing domestic demand and exports in US, Euro area and Japan which masked the fragile growth in UK. Growth in EMs was largely underpinned by higher commodity prices and strong consumer spending which supported growth in Russia, Brazil, China, and Turkey even as India recovered from the downturn.

In the third quarter alone, based on consensus estimate, global GDP growth came it at 3.3%1 reflecting the troika of recovery in global investment and manufacturing activity,expansion in world trade, and increased global consumption. Against the backdrop of the broad-based growth across the emerging, developing, and developed economies, global financial markets sustained their positive trend by gaining over 2017 (MSCI World Index:
+22.4%).

Preliminary estimates from the US bureau of labour statistics reveal the US economy grew by 3.3% YoY in the third quarter of 2017, its fastest pace since Q3 2014. Growth in US was mainly reflective of strong numbers on private domestic investment (+1.20% YoY) and private inventory investment (0.8% YoY), an off-shoot of strong demand from manufacturing and energy sectors. Despite slower growth in consumer spending, which makes two-thirds of the GDP, growth in net exports (+0.43%) and government spending (+0.07%) neutered its impact.

The solid output momentum in Germany was fuelled by uptick in exports and investment, while a strong performance in the industrial and services sectors supported growth in Italy. Other economic indicators across the Euro area remained strong with employment rising by 0.4% QoQ in Q3 17 and unemployment falling to a low of 8.8% in October 2017 (compared to 8.9% in September 2017 and 9.8% same period in the prior year).