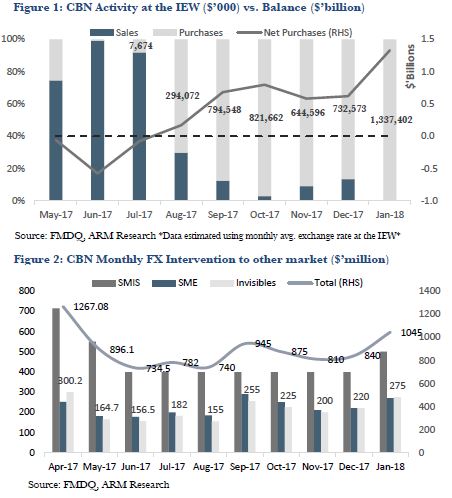 In the month of January, daily average turnover at the Investors and Exporters Window (IEW) touched an all-time high of $274million, 35% higher MoM with a total of ~$6.1 billion sold. Notably, although the CBN has been a net buyer in the market since August 2017, (~$569 million average net purchase from August – December 2017), the apex bank mopped up sizable dollar flows in the month of January – net purchase of $1.3 billion.

Basically, supply in the IEW has consistently outpaced demand, providing the CBN with scope to shore up its external reserves. As at 31st January 2018, the apex bank reserves grew by +5% MoM to $40.7 billion. In our view, the CBN is taking pre-emptive measures for any expected outflows stemming from global monetary policy normalisation and domestic political risk. However, this observation begs the question on why the excess supply has yet to force a noteworthy appreciation in the naira, especially when the CBN accounted for ~22% of transactions in the window. Is the CBN trading off between an appreciation in the value of the naira for currency stability over 2018?

Further analysis into trading activities in the market reveal increased dollar inflows as client sales to the I&E Window jumped 27% to $2.3billion while member (dealing banks) purchases declined 19% to $848 million – indicating increased FX liquidity in the window. The CBN also increased sales across other segments of the market in a bid to close market spread. Precisely, the apex bank increased its sales to Wholesale, retail SMEs and invisibles’ market by 25% to $1 billion.

Over the rest of the year, we do not see any shock to the currency as our analysis reveal the expected monthly oil and non-oil inflow as well as the current build-up of the country’s reserve puts the apex bank in a better position to defend the naira. Underpinning our view is a scenario analysis carried out on the potential impact of a capital flight from the fixed income market as we believe foreign investors will remain attracted to the equity market. We look at maturing bills for the rest of the year and assume foreign investors hold back from rolling over their maturing bills because of expectations of lower return and election risk.

Furthermore, on the basis that foreign investors hold 30-50% maturing instruments, we overlay the expected outflow with our expectations on oil and non-inflow for the rest of the year. For us, despite the higher outflow in May 2018 due to the maturing bond worth N302 billion ($838 million) – the current build up in reserve ($40 billion) as well as the move by CBN to take up the excess FX supply at the I & E window takes out thought of a depreciation in the currency.