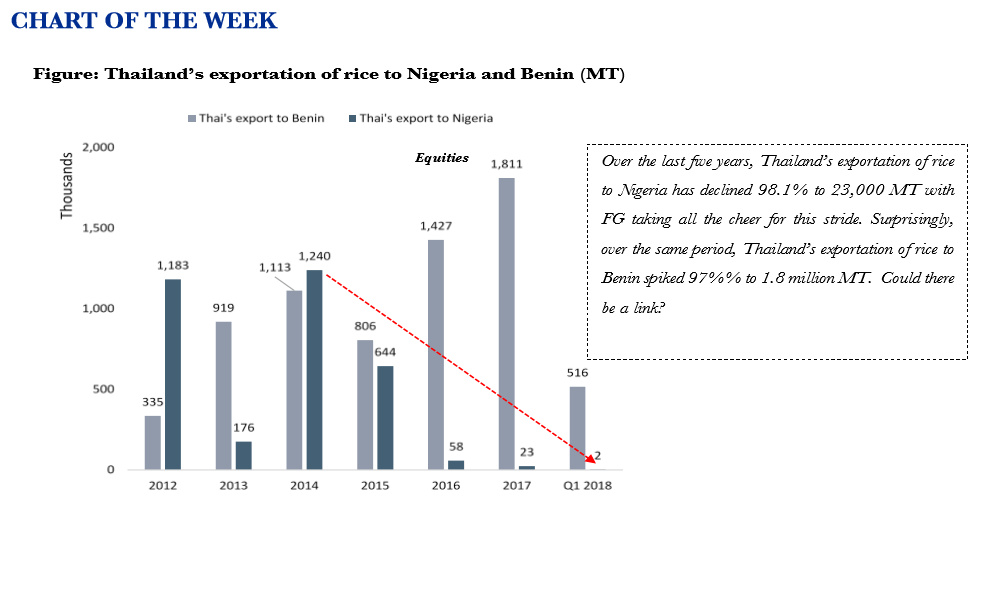 This week, the Federal Open Market Committee (FOMC) held its monetary policy meeting leaving its policy rate unchanged at 1.75%. Elsewhere, the dollar marked a fresh four-month high against basket of currencies on Friday after the release of the monthly nonfarm payrolls which showed that 164,000 new jobs were created in April. Additionally, the dollar got a boost from positive U.S labour data which showed that unemployment rate for the month of April declined to 3.9%. As at 19:30 pm WAT, Brent prices rose to $74.92/bbl. owing to possible sanctions on Iran with a decision set to be made by 12 May on whether to renew sanctions on Iran.

CBN published its monthly Purchasing Manager Index (PMI) survey which showed an expansion in both Manufacturing PMI and Non-Manufacturing PMI for the thirteenth and twelfth consecutive month respectively.

In the just concluded week, the naira yield curve inched up 26bps WoW to 12.5%. This was driven by liquidity strain following CBN OMO sale during the week which drove a 47bps and 5bps spike in yields at the short and long end of the curve respectively. Also, on Wednesday, FG sold N90 billion worth of Treasury bills split across 90 Day (N9.5 billion; 10%), 182 Day (N47.7 billion; 10.95%), 364 Day (N38.2 billion; 11.15%). Despite being four times oversubscribed (Total subscription of N402.7 billion), FG’s T-bill sale of N95 billion was largely in line with its planned offer (N95 billion) as FG continues to shun Naira debt following its quest to reduce its cost of debt service.