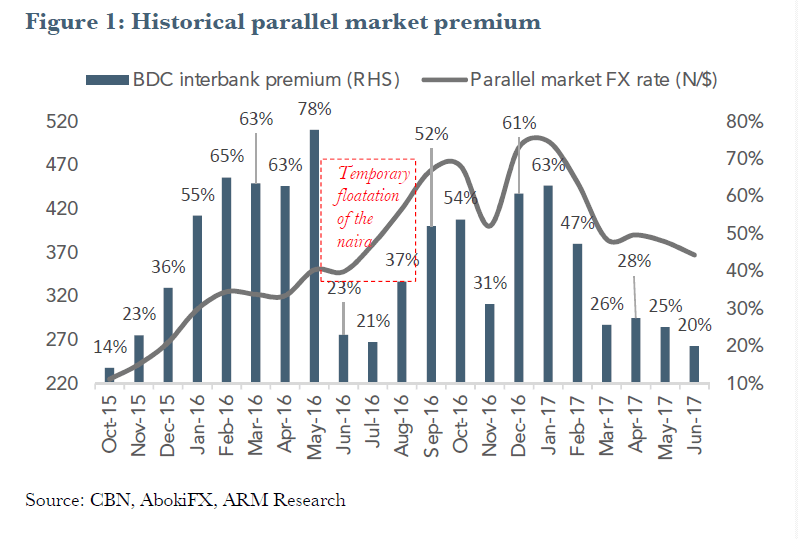 In our H1 17 Strategy Report, we noted that the CBN could maintain its hard peg on the naira at N305/$ as higher oil receipts and proceeds from FG’s planned external borrowings bolster FX reserves. Unsurprisingly, following a strong rise in the nation’s reserves (+17.1% over H1 17 to $30.3 billion), the

CBN raised its dollar sales towards the end of February. This, together with the creation of new FX windows and relaxation of some stringent policies, lowered dollar demand at the parallel market.

Against this backdrop, the premium between the interbank and parallel market contracted to a 20-month low at the end of June even as the once-elusive portfolio flows began to trickle in. Overall, whilst CBN’s stringent FX policies had hitherto been “a kiss of death” to the currency market, which forced turnover to a record low, its eventual liberalisation policies appears to be springing the market back to life.

Following the instating of a N305/$ currency peg at the interbank in September 2016, the naira

held steady fairly around what was prescribed over the first half of the year. At the parallel market however, it remained feebler—falling to a record low of N520/$ in February (December 2016: N490/$) before rebounding in succeeding months. The naira depreciation in the earlier part of the year reflected lower FX liquidity (FX turnover fell to a record low of $1.4 billion in January) as CBN, in response to 2016 shocks to oil receipts, placed emphasis on dollar demand management.

Later on though, following the widening of FX market premium between interbank and parallel market to a post-floatation high of 70%1 and improvement in foreign reserves, the CBN made a U-turn with regards to its currency policies. Particularly, the apex bank created a special FX window for invisibles (i.e. personal and business travel allowance, medicals, school fees), wherein permissible users obtained FX at a concessionary rate of N375/$ which reduced demand pressures at the parallel market. In addition, the CBN relaxed the preferential FX allocation to manufacturing companies and reduced the tenor on its currency forward contracts to 60 days (vs. 180 days previously).

The impact of these measures, as well as a two-fold MoM jump in dollar sales to BDCs to a fourteen-month high of $89 million in February, underpinned a 9.5% MoM appreciation in the naira to N450/$ at the end of February. Interestingly, the policy pronouncement came a working day after the National Economic Council mandated the apex bank to take actions to stem widening parallel market premiums.

The CBN shift also followed the transfer of more executive powers to the Vice President, Professor Yemi Osinbajo, a supporter of greater NGN flexibility relative to the, then, absent President Buhari who opposed naira weakness and advocated for dollar demand curtailment. Overall, the steeper naira gain (+11% MoM to N385/$) occurred in March following an upsurge in CBN dollar sales (doubled MoM to $1.2 billion) and adjustment to the FX offer rate to both BDCs and invisibles FX window to N360/$.