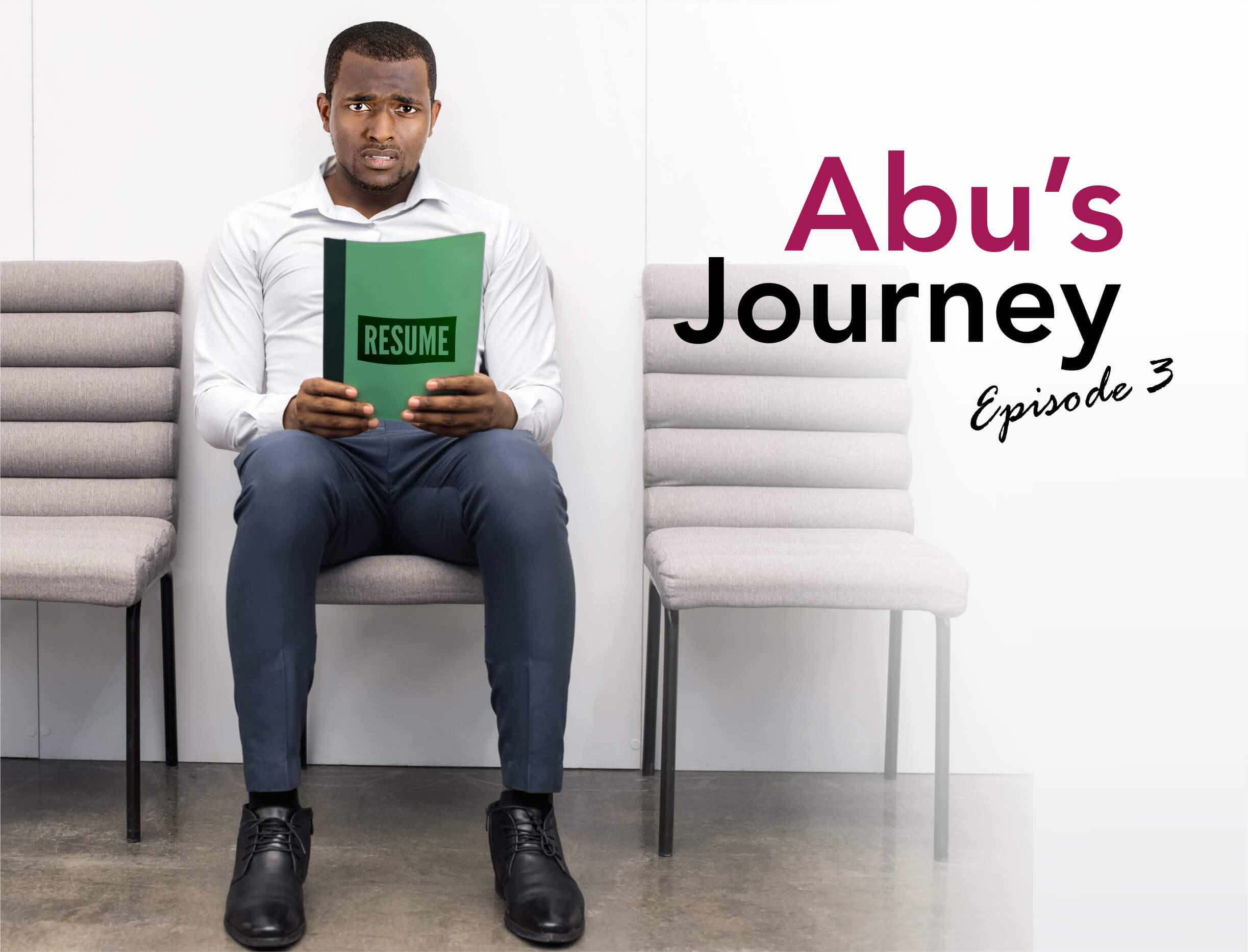 In Episode one, Abu was just passing out from the compulsory 3-weeks orientation camp. Episode two sees him counting the days until NYSC is finished. Now in this episode, Abu goes full mode job seeker.

Lagos was the same. Always buzzing with activity. Abu was back where he belonged. The first few weeks progressed with Abu going to every job portal to apply for jobs. As a Mechanical Engineer, he had his eyes on the big money. Oh, it had to be an oil company or a multinational. Anything short of that, and Abu wasn’t interested.

First few months had gone by with no ‘alawi’ alert and Abu realized that situation had changed. His desperation to secure employment tripled. He had complained of the seemingly small corpers’ allowance, but now, he would appreciate even half of it.

While his search for a job intensified, his feelings for Yinka also skyrocketed. Abu was like a child missing his favourite toy and wasn’t happy about it. He would spend all the time away from applying for jobs, calling, texting or chatting with Yinka.

But that too would change. Yinka soon landed a job with an advertising firm and became too busy to constantly communicate with Abu. That too, added to his desperate need for a job because he felt ‘alone’.

Abu was determined to sue his mobile service providers, only he didn’t have the money. How could they constantly get his hopes up with their unsolicited text messages only for him to realise it was no job interview text? These days, he paid little heed to the alert chimes on his phone. It had to be those ‘yeye’ messages again, he would think. But on this day, 5 months post-NYSC, it wasn’t.

The message had dropped early that morning but Abu couldn’t care less about such unsolicited messages. Later that night, while he browsed through his phone to delete the messages, his heart stopped. Then started and began beating faster.

“Dear Abubakar Hassan, you have been invited for an interview at AGEP Oil and Gas on April 26th. Venue: 5a AGEP road, off Oyeniran road, Ikoyi. Time: 12pm. Kindly come with your credentials.”

Abu jumped down from his bed, cleaned his eyes and read the message again. It was real. Then further scrolling and swiping revealed an email sent by the same company. Abu was giddy with joy. Hope, finally!

Having studied his G-Mat night and day, plus weekly episodes of ARM’s Diary of a job hunter video lessons, Abu was good to go. He brought out the suit and shirt he had reserved specially for the occasion and ironed it. Then the countdown to Friday began.

Yinka gave him a truckload of tips and kept calling to assure him she was praying for him. Two days felt like two months as Abu anticipated his interview.

Abu woke up by 4am that Friday morning, had his bath, and dressed up for his interview. He then proceeded to pray every prayer he knew how to before heading out. His mum called out to him on his way out. “Abu, isn’t 6am too early to be leaving for a 12pm interview?” she asked. Abu, one foot already out the door responded, “Mum, I can’t bank on Lagos traffic. Na today wey I get interview tanker fit fall for road. Abeg wish me luck o.” And he was gone.

He arrived at the office exactly 9am and sat to wait at the reception. The timing was perfect. It afforded him the time to relax, get used to the atmosphere and mentally rehearse all he would say and ask.

Before long, Abu was called in for his interview. It went better than he expected and he looked forward to positive news.

Immediately he left the venue, he called Yinka to give her feedback. She reassured him that he would get the job. He believed in his heart that he would too.

Weeks soon turned into one month, yet no word from AGEP Oil and Gas. The desperation returned and Abu became a nervous wreck. The nerves got the better of him when Yinka told him of her superior at work who she kinda liked and who was asking her hand in marriage.

Each day, he questioned God and himself. No job, and the one woman he loves may soon belong to another if he didn’t do something fast.

Perhaps God heard his questions and provided answers. Abu finally got the call he had long waited for. He had gotten the job and was required to pick up his employment letter the following week to resume June 1st.

His job hustle had finally paid off and his career has started. Now, he needs to know what the climb to the top entailed, because that is where he is headed… plus there is still that pinching issue about the possibility of losing the love of his life.

(With the job hurdle jumped, Abu now has his eyes on the future… one that has Yinka in it. But will that be possible? Find out in next week’s episode.)