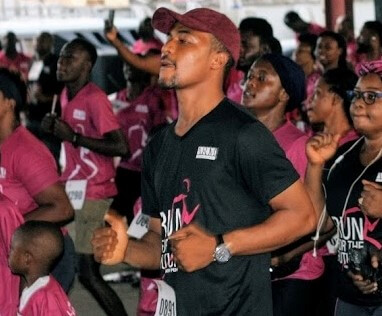 I was supposed to be in Enugu today and leave for Abuja tomorrow night. But the appeal of a 10km run 🏃🏼‍♀, to test myself against so many runners for the first time was too strong so I chose today’s marathon over work in Enugu.

I dropped dad at the airport at 6:20 am in my running gear and headed straight to the Blue Roof race convergence point. I saw @HerRoyalGness at the gate doing registration work alongside her colleagues. Funny I didn’t see her again until the finish line 🏁, where she excitedly gave me a high five and medal. She teased I didn’t make 1 2 or 3 but neither of us was disappointed.

We are at the start gate and there’s like 200 people in front of me, much more than 300 behind me. I cannot lie, I was slightly overwhelmed. When I do my routine Saturday morning runs, I do it alone without a partner or competition. I was sure I will finish the race. But what position will I finish? I’ve never run 10km at a stretch so I was thinking, the first target; run without stopping. Then make top 20.

6 minutes to the start of the race, I created a running playlist. And entered a small conversation with the runners around me. The race starts and I’m listening to Mr Real’s, Legbegbe. Lol. At 2.5km I took off my earphones. Why? The reality was hitting hard. the number of runners ahead of me and the gap to the First position was so great. So I had to focus and I do it better without music. I passed one of the guys who was saying my pace per kilometre was too slow in the conversation I joined moments before the race. As the race progressed through kms 3 and 4, I thought it weird the way runners were taking water bottles at every km and pouring over their heads. It was until I tried it myself I realised the energy boost it gives. Lol.

I caught up with a runner and asked ‘how many more kilometres to go?’ He said 4 and a half. He suggested we increase speed when we arrive 7kms. Ok. Perhaps he thought I will stop running at some point and walk instead. When he saw it wasn’t going to happen, my unlikely companion of 2kms said goodbye as he slowed for a walk. Whatever happened to increasing speed at 7km? I met another runner who asked me in pidgin for the ambulance saying he was gonna faint. I told him the ambulance was ahead and he should stop instead.

Then it started to look like the run was gonna go on forever at some point for me. I thought of stopping when I collected a bottle of water from one of the nestle water girls.  I thought about @MUIZ BUSARI and I knew I couldn’t stop. Luckily, the water girl informed me this was the last kilometre!

I braced for the final push determined no one was gonna go past me any more till I reached the finish line. As I approached the end, I thought about my objectives and if I achieved them. To run nonstop I achieved that. To make top 30, I failed. Honestly, at 4km I switched my target to top 50.

It was when I finally stopped running at the finish line and felt the gale of relief that moved through my bones that I realised to show up and finish the race was the most important objective. My race time was 53minutes but I heard the top 30 finished in under 40 minutes.

(Sent in by Habib D. Kowantan)

Did you Run for the Future with us last Saturday? Tell us your experience…

Drop your runner’s tale in the comment section below.